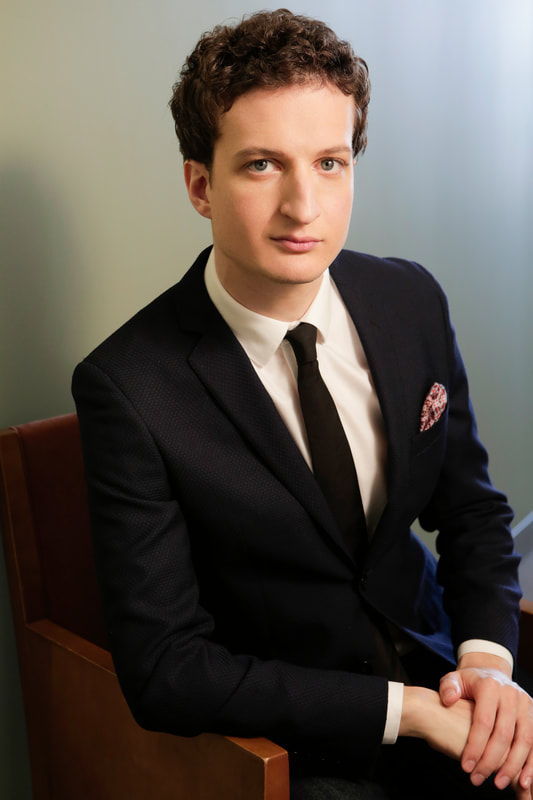 The brilliant 29-year-old Italian-born pianist Rodolfo Leone, whose career is supported by the Amron-Sutherland Fund for Young Pianists at the Colburn School, was the first-prize winner of the 2017 International Beethoven Piano Competition Vienna. Described as “a true sound philosopher” (Oberösterreichische Nachrichten), Rodolfo released his debut album on the Austrian label Gramola in May 2018. The all-Beethoven disc features two pillars of the piano repertoire: the “Hammerklavier” Sonata and the “Waldstein” Sonata. His playing has been described as having “impeccable style” and “absolute technical control” (Il Nuovo Amico).

Rodolfo’s recent seasons include a collaboration with James Conlon and LA Opera and debuts with the San Diego Symphony (Liszt’s Piano Concerto No. 1) conducted by Michael Francis, Pasadena Symphony (Mozart’s Piano Concerto No. 21) with conductor David Lockington, and Borusan Istanbul Philharmonic Orchestra (Beethoven’s Concerto No. 5, “Emperor”) with Sascha Goetzel; he also performed Beethoven’s Triple Concerto in Walt Disney Hall under the baton of Xian Zhang. In May 2019, he gave a recital tour in Austria, culminating in a performance in Vienna at the Brahms-Saal of the Musikverein. He also performed recitals in Los Angeles and Naples, Florida, and appeared on the chamber music series Le Salon de Musiques in Los Angeles. As a 2018-19 Performance Today Young Artist in Residence, Rodolfo’s live recordings were broadcast nationally throughout the United States.

A native of Turin, Italy, Rodolfo made his orchestral debut in 2013 performing Rachmaninov’s Piano Concerto No. 3 with the Haydn Orchestra of Bolzano and Trento (Italy). He toured Italy with that orchestra the following year performing Shostakovich’s Piano Concerto No. 1. Rodolfo made his North American debut in 2014 performing Liszt’s Piano Concerto No. 1 with the Toronto Concert Orchestra. Since then, he has performed with, among others, the Vienna Radio Symphony Orchestra with Stéphane Denève and the Colburn Orchestra at Walt Disney Concert Hall; and recitals at Festival Napa Valley and the Soka Performing Arts Center. He has also performed chamber music with Lynn Harrell, Fabio Bidini, Andrew Schulmann, and the Viano String Quartet.

Rodolfo has performed extensively throughout Europe, North America, and China. These performances include debuts in venues such as the Musikverein in Vienna, Steinway Hall in London, the Music Hall of the National Centre for the Performing Arts in Beijing, the Politeama Theatre in Palermo, the Mozart Concert Hall of Accademia Filarmonica and Teatro Carlo Felice di Genova in Italy, and the BASF Gesellschaftshaus in Germany. A top-prize winner of several major piano competitions, Rodolfo was awarded top prizes at the 2014 Toronto International Piano Competition and the 2013 Busoni International Piano Competition. Pianist magazine described his concerto performance during the 2017 International Beethoven Piano Competition as a “communion with the orchestra” that “was raptly convincing… robust and joyful.”
​
Rodolfo is currently based in Los Angeles where he previously studied at the Colburn Conservatory of Music. He holds both a Master of Music degree and an Artist Diploma from Colburn, where he studied with Fabio Bidini.  He previously studied at the Hans Eisler School of Music in Berlin, Germany and at the G. Rossini Conservatory in Pesaro, Italy.
WEBSITE

Montana Shakespeare in the Parks Executive Director Kevin Asselin holds an MFA in Acting from the University of Illinois and a Bachelor of Science in Music-Theatre from Plymouth State University. Prior to assuming his current position, Kevin worked with MSIP for 13 seasons as an actor, fight director, and director. With MSIP, he has directed productions of Richard III, The Taming of the Shrew, As You Like It, The Merchant of Venice, A Midsummer Night’s Dream,The Two Gentlemen of Verona, and a staged reading of The Robben Island Bible. In conjunction with Intermountain Opera-Bozeman, he has directed Man of La Mancha, My Fair Lady, and A Little Night Music. A proud member of Actors’ Equity Association, his Chicago acting credits include several productions with Chicago Shakespeare Theater, Writers Theatre, Goodman Theatre, Steppenwolf Theatre Company, Defiant Theatre, Famous Door, Shakespeare on the Green, Chicago Symphony, and others. Regional credits include 10 seasons with Notre Dame Shakespeare Festival, Oklahoma Shakespeare in the Parks, Illinois Repertory Theater, Papermill Theatre, Plymouth Repertory, Struthers Library, and others. A two-time Joseph Jefferson-nominated fight director, he has been a Resident Fight Director with the American Players Theatre, the Notre Dame Shakespeare Festival, Theatre OCU at Oklahoma City University, and holds actor combatant certifications with the Fight Directors of Canada and the Society of American Fight Directors. Additionally, Kevin was an Associate Professor of Movement and Acting at Oklahoma City University and has worked as a Guest Artist with Plymouth State University, Ball State, Kenyon College, University of Notre Dame, University of Illinois, Chicago Shakespeare Theatre, American Players Theatre, and Interlochen Academy.