NIGHTS IN THE GARDENS OF SPAIN

Stefan Sanders, conductor and arts advocate, cultivates cultures of artistic excellence, sustained growth and development, and meaningful engagement within the communities he is fortunate to serve. This year, Stefan embarks on his seventh season as the Music Director of the Central Texas Philharmonic, his third season as Music Director for the Fayetteville Symphony Orchestra in North Carolina and his second season as Music Director for the Spartanburg Philharmonic in South Carolina. Stefan will make debuts this season with the Bozeman Symphony in Montana and the Filharmonia Podkarpacka in Rzeszów, Poland. He will also make return engagements this season to the National Symphony Orchestra of Cuba in Havana, the Filharmonia Warminsko-Mazurska in Olsztyn, Poland, the Stockton Symphony, and several weeks as the cover/assistant conductor for the New York Philharmonic

Stefan recently concluded a four year tenure with the Buffalo Philharmonic Orchestra. Appointed its Associate Conductor in 2014, Stefan was promoted to Resident Conductor in 2016. While with the BPO, Stefan lead over 200 performances on all of the orchestra’s series. Of note, Stefan began his professional career as a member of the BPO’s trombone section where he played from 1999-2007 before pursuing conducting full time. He also recently concluded a one year appointment as Principal Conductor for the Hot Springs Music Festival in Hot Springs, Arkansas 2018. Stefan was a featured conductor for the League of American Orchestras “Bruno Walter National Conductor Preview.” The prestigious conductor showcase is designed to feature talented young conductors poised for music directorships with American Orchestras and was hosted by Giancarlo Guerrero and the Nashville Symphony in May of 2016.

Prior to a career as a conductor, Stefan was an internationally renowned trombonist, having performed as a soloist in North America, Asia, and Europe. His performance of Eric Ewazen’s Concerto for Bass Trombone and Orchestra, with the Czech Philharmonic, can be heard on the
Albany Records label. As a trombonist, Stefan performed with several orchestras including the New York Philharmonic, Seattle Symphony Orchestra, the Florida Orchestra, and the Seattle Opera’s 2001 production of Wagner’s Ring Cycle.

Stefan was a fellow at the American Academy of Conducting at Aspen under the tutelage of maestros, Robert Spano, Larry Rachleff and Hugh Wolff. He is a graduate of the Juilliard School, the University of Texas at Austin, and the Interlochen Arts Academy.
website

“We were all immediately struck by the intensity, passion, concentration and depth of emotional commitment in Marika’s playing. The promise for great things to come was unmistakable. “
-​Brian Levine, Managing Director, Glen Gould Foundation 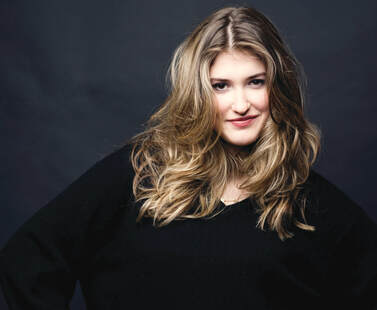 With unparalleled technical, musical and communication skills, Marika Bournaki is at once a world class performer, outstanding pianist, vivacious young woman… and the freshest face on the classical music scene. Marika’s innovative approach to her art and performance is reflected in her recent collaboration, “Let’s Play”, with cutting-edge and world-renowned multimedia creative shop, Moment Factory. Her role as Ambassador to the Orchestre symphonique de Montréal’s summer event, “A Cool Classical Journey” was an exceptional opportunity to explore new and exciting ways to share her music with the public. Marika not only brings distinctive interpretations to favourite standards, she also extends her passion for music by commissioning works by younger composers and collaborating with artists from various fields.

The award-winning documentary, “I am not a rock star”,  directed by Bobbi Jo Hart and featuring Marika, has captivated audiences of all ages in festivals around the world. The feature-length film chronicles Marika’s evolution as an artist from the age of 12 to 20. A runaway success at multiple international film festivals, “I am not a rock star” was screened at, among others, the 30th International Festival of Films on Art in Montreal, the Thessaloniki International Documentary Festival in Greece, the Barcelona Music Documentary Film Festival, the DocsDF Festival in Mexico, the Napa Valley Film Festival in California. Marika’s unique approach and intense passion have also been heard over the airwaves on Radio-Canada, Radio-France, BBC, WQXR in New York City, and Toronto’s Classical 96.3 FM. She has been featured on television networks such as ERT, TF1, France 2, CTV, Global, Radio-Canada, CBC, and Canal+.

​Recent performances include a recital at the Onassis Cultural Centre in Athens, Greece, a recital at Plaza Hidalgo in Mexico, a benefit recital for the Glenn Gould Foundation at New York’s Carnegie Hall, a guest solo appearance in Montreal with the Orchestre symphonique de Montréal, recitals at the National Arts Center in Ottawa, at the Flanders Festival in Belgium, the Konzert Accordate Series in Aachen Germany, the EMMA Concert Association in Florida, Chamber Music Northwest in Oregon, and the Luminato Festival in Toronto. Other engagements include performances with the St. Petersburg Symphony Orchestra in Russia, as well as recitals in South Korea, Romania, Italy,Switzerland, and England. Marika holds a Bachelor’s degree from the Juilliard School of Music, in New York. She participated in the International Academy Mozarteum in Salzburg, Austria, as well as the Internationale Mendelssohn Akademie in Leipzig, playing in master classes for Dmitri Bashkirov, Andras Schiff, Karl-Heinz Kammerling and Arie Vardi.

At the age of 5, Marika began her piano studies.  At 9, she was soloist with Orchestre Symphonique de Montréal in a performance of Mozart’s Piano Concerto No. 17.  By age 11, she played Beethoven’s Piano Concerto No. 1 under the direction of Yannick Nézet-Séguin. She also won First Prize at the Pro-Piano Romania International Piano competition, held in Bucharest, and was awarded the Mihail Jora Prize by the Association of Music Critics.  At 12, Marika was invited to perform Ravel’s Piano Concerto in G with the Timisoara Philharmonic Orchestra in Romania and at 15, she won Third Prize at the 17th International Roma 2006 Piano Competition in Italy.  At age 16, she was selected as one of eight pianists worldwide to participate in the Verbier Festival Academy in Switzerland, and was invited back in 2009.  At 20, Chatelaine Magazine named her one of Canada’s 2011 Women of the Year.  She continues to play internationally.