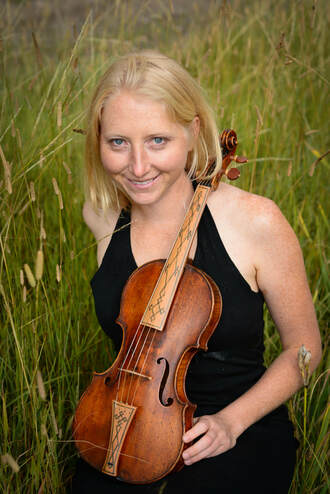 ​Carrie founded the I‐90 Collective, a baroque ensemble, which performs a house concert series across Montana and on series from Seattle to Syracuse. She also founded Baroque Music Montana, which presents a series of community concerts in southwest Montana and the Period Performance Workshop.
​
As a modern violinist, Carrie serves as concertmaster of the Bozeman Symphony. Carrie has performed as concerto soloist with the Fairbanks Symphony, Casper Symphony, National Repertory Orchestra, String Orchestra of the Rockies, and Bozeman Symphony. She has appeared as guest concertmaster of the Big Sky Festival Orchestra and Helena Symphony, and guest artistic director of String Orchestra of the Rockies. She was twice featured in the Grammy Award-winning TV series, 11th and Grant. She founded and directs the Second String Orchestra for amateur players and the Bozeman Chamber Ensembles for youth. Carrie maintains a studio of thirty-five students, including award winners at the MTNA and ASTA competitions.
Carrie received degrees from Carnegie Mellon under Andres Cardenes and a master’s degree from the Cleveland Institute of Music in violin performance and Suzuki Pedagogy, and recently graduated with a second master’s degree from The Juilliard School in Historical Performance. An avid adventurer, Carrie placed first in her age group in the Springfield Missouri Marathon, and second in her age group in the Old Gabe 50k Trail race.

​Pianist Julie Gosswiller’s greatest passions in life is making music with other musicians and for that she is in high demand. Ms. Gosswiller has collaborated with many of her colleagues at Montana State University and with renowned musicians, Adam Barnett Hart, of the Escher String Quartet, the Ahn Trio, Dallas Brass and more. Together with her colleagues, she will concertize in China this December. For more than 17 years Ms. Gosswiller and Elizabeth Croy have performed art song throughout Montana and the United States. The two have been featured twice now on the Emmy Award Winning Series, 11th and Grant with Eric Funk. Eric Funk wrote of Julie’s playing, “her technique is only dwarfed by her expressiveness and deep interpretation of the music. I have enjoyed hearing her performances numerous times over many years a can attest to her incomparable artistry.” They won numerous awards in the Cybersing Competition including the Nancy Babcock award for best pianist and were one of ten teams chosen nationally to participate in the Cleveland Art song Festival. They continue to promote art song in venues around Montana. Ms. Gosswiller’s other passion is teaching at Montana State University where she received the President’s Excellence in Teaching Awards. Her students have won the Montana State University Concerto competition. Private students have won the Montana Music Teachers Association competitions at the elementary, junior and senior levels. Her students have won honors at the regional level and gold medals in Musicfest Northwest. A sought-after clinician, Julie and her students will present findings from a collaborative research project at the Montana Music Teachers Association Fall Festival in November. Ms. Gosswiller earned a master degree in piano performance from the University of Colorado where she studied with Angela Cheng, Robert Spillman and Doris Lehnert. She paid her way through school on an accompanying assistantship and went on to be a student coach accompanist at the Aspen Music Festival. There she served as rehearsal pianist for voice faculty in addition to her work with peers. After graduating she served as pianist for Colorado Children’s Chorale on regional tours and for sold out shows in Boetcher Concert Hall in Denver before moving to Bozeman, MT with her family. Ms. Gosswiller enjoys cross- country skiing, telemarking, fly fishing and backpacking the mountains of Montana with her husband, two sons and dogs. 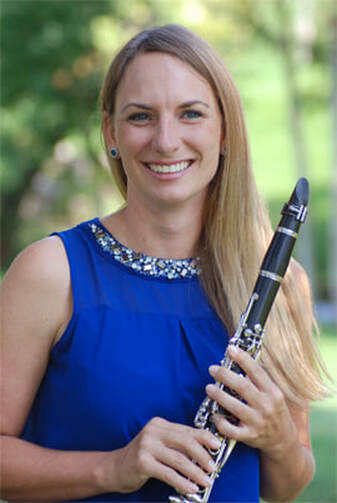 Wendy Bickford, Clarinet - at six years old, Wendy heard her older brother practicing the clarinet.  Even though the sounds were rather frightening at times, she wanted to play it.  He charged $5 a minute for Wendy to try it out.  After discovering the classical music station and Mozart's Clarinet Concerto, life was never the same; she knew she wanted to be a performer.  Wendy earned her bachelor’s from the Peabody Institute of The Johns Hopkins University and her master’s from the University of Northern Colorado.

Prior to moving to Montana three years ago, Wendy was a clarinetist in “The President’s Own” Marine Band performing for Presidents George W. Bush and Barrack Obama.  During this time, she performed as a soloist, chamber musician and coordinated outreach programs throughout the United States.  Wendy has also performed with several orchestras including the Colorado Symphony.

Currently, Wendy has started a private studio and is a member of the Billings Symphony Orchestra and Chorale.  She has started a clarinet choir for high school students and is hoping to expand to younger players soon.  Wendy is also in progress of creating a non-profit program to provide opportunities for every child to have more music education in their lives.  Her goal is to see a symphony orchestra of 8 to 10 year-olds that includes children playing mini bassoons! 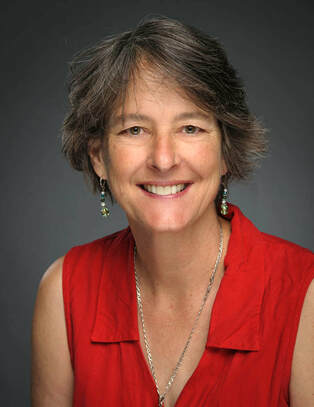 Pianist Laurel Yost is a beloved member of the professional staff in the Music School at Montana State University. The following quote is from a student that prefers to remain anonymous, “[Professor Yost is] among the most insightful musicians I've ever met. She hears everything. She sight-reads with a higher level of detail and stylistic subtlety than most graduate students will ever perform. She knows how to set goals that you can achieve... if you are willing to practice effectively (and diligently).” The professor and pianist performs as a soloist and with ensembles including: Camerata Trio, Beethoven Trio, Milhaud Trio, and Montana State University-Bozeman New Music Ensemble. Having studied at Colorado State University, the Guildhall School of Music and Drama in London, England, and Whitworth College in Spokane, Idaho, she is currently completing her Doctorate of Musical Arts at the University of Iowa.