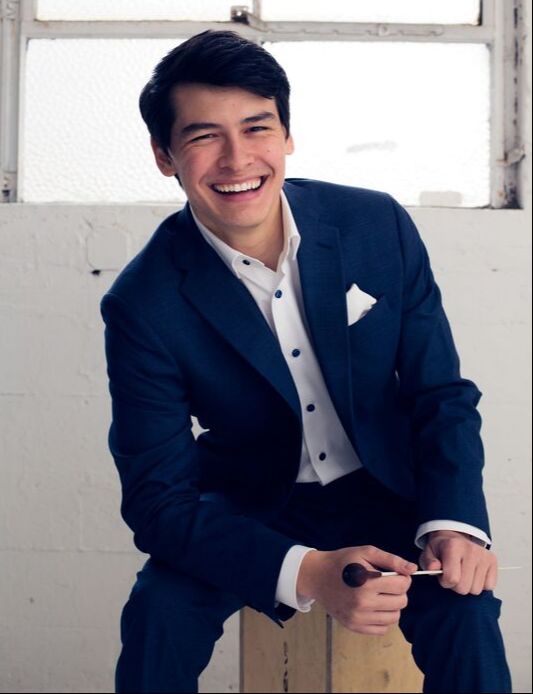 Photo: Stark Photography
The Bozeman Symphony Board of Directors are pleased to announce internationally recognized conductor Norman Huynh has been appointed its new Music Director. Huynh was publicly announced the Bozeman Symphony’s new Music Director at a virtual event on June 8th via a live Zoom meeting hosted by Board of Director’s Chair Stephen Schachman and Executive Director Emily Paris-Martin held at Old Main Gallery.

Norman was selected out of six finalists following a year-long Music Director search throughout the 2019 – 2020 concert season. He was selected with the help of the Bozeman Symphony Board of Directors, an eight-person search committee, staff, musicians, and community participation.

Stephen Schachman said, “Norman’s talents coupled with our terrific Executive Director Emily Paris-Martin and our dynamic staff will ensure an exciting future for our community and our musicians. It would be remiss not to thank the search committee and our patrons who supported us during the search.”

Norman Huynh has established himself as a conductor with an ability to captivate an audience through a multitude of musical genres. Born in 1988, Norman is a first-generation Asian American and the first in his family to pursue classical music as a career. Along with his role as the Bozeman Symphony’s Music Director, he will continue as the Harold and Arlene Schnitzer Associate Conductor of the Oregon Symphony.

Norman is honored to be named the Bozeman Symphony’s new Music Director, and see’s the appointment as the beginning of an exciting adventure.  “I am inspired by Bozeman’s support of the arts, and the closeness of the community as a whole. Everyone that I met during my time in Bozeman, from baristas at coffee shops to The Last Wind Up, expressed a genuine interest in the Bozeman Symphony. I look forward to joining this community and creating musical experiences that continue to bring us closer together,” said Huynh.

He adds, “As I step into the role of Music Director, I am most excited about the potential of what we can accomplish together. I look forward to expanding our collaborative efforts and building lasting partnerships with other arts institutions in town. In the wake of current world events, I believe that the role of the Symphony is to reconnect us with each other, to facilitate healing and forward momentum through the language of music.”

Bozeman Symphony Concertmaster Carrie Krause is thrilled for the future of her fellow musicians and the entire Bozeman Symphony. She said, “Musically, Norman’s well-equipped to inspire and lead our orchestra to a new level of excellence through his musical passion, awareness of style, training at top-level institutions, adaptability, and deep dedication to the art of our craft.”

Norman is a recipient of the 2015 Yale Distinguished Music Educator Award for his work with the Portland (Maine) Symphony Orchestra’s Musical Explorer’s Program. As the Assistant Conductor of the PSO from 2013-2016, Norman visited over sixty schools across the state of Maine and co-founded Symphony & Spirits, a series of events for young professionals, between the ages of 21-39, to make the orchestra more accessible and engaging for a younger audience. ​ Jon Harney is an associate professor of music at MSU where he teaches voice and choir. He received his Bachelor of Music degree in music education from Luther College, Decorah, Iowa, where he studied under Weston Noble, and Masters and Doctor of Musical Arts degrees in vocal performance from the University of Minnesota where he studied with Clifton Ware. As a tenor soloist, he has sung more than twenty-five principal and supporting roles in opera, operetta, and major works with orchestra and chorus. While active with the University of Minnesota opera theater, he appeared as The Sailor in Dido and Aeneas, Fenton in Falstaff, Nemorino in The Elixir of Love, Don José in Carmen, Ferrando in Cosi fan tutte and Junki in the US premier of Rautavaara's Aleksis Kivi. Other roles in the midwest included Dr. Caius in Falstaff and Basilio in Le Nozze di Figaro with the Pine Mountain Music Festival, Fenton in The Merry Wives of Windsor with Dorian Opera Theatre and Frederick in a touring production of The Pirates of Penzance with the Madison-based Opera for the Young. He earned an honorable mention award in the 1998 Minnesota District Metropolitan Opera Auditions. Performances in Montana have included the roles of Edmondo in Manon Lescaut and Remendado in Carmen with the Intermountain Opera as well as Bach's Magnificat and Handel's Messiah with the Bozeman Symphony, Mozart's Vespers with the Butte Symphony and Mozart's Requiem with the Great Falls Symphony.

Prior to coming to MSU-Bozeman, Harney was on the voice faculty of Macalester College and directed high school choirs in the North St. Paul school district. In 2001, Dr. Harney joined the MSU-Bozeman music faculty where he teaches studio voice lessons, opera scenes class and directs the University Chorus. In 2002, he was selected as one of twelve voice teachers nationwide to participate in the National Association of Teachers of Singing Intern Program working under master teacher Elaine Bonazzi. He served as president of the Montana Chapter of the National Association of Teachers of Singing from 2007-2009. In summer 2008, Harney was selected to sing in the Westminster Choir College Chamber Choir in residence in Florence, Italy, singing under the direction of Joe Miller and in July 2010 sang under the direction of Dale Warland as part of the Festival Chorale at the Minnesota Beethoven Festival. In 2011, Dr. Harney assumed the post of chorus director of the Bozeman Symphonic Choir.  His singers have gone on to several graduate voice programs including the Jacobs School of Music at Indiana University, Manhattan School of Music, Cincinnati College-Conservatory of Music and the University of Oregon.