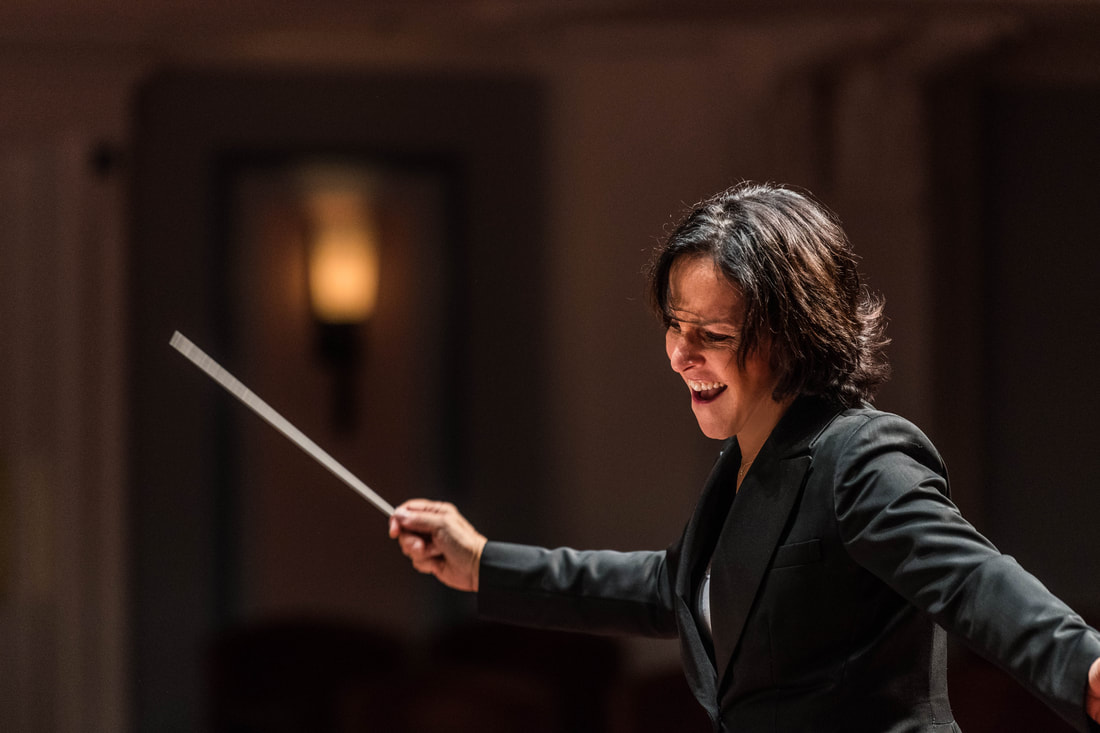 Photo: Chris Bucher
Versatility, passion and innovation are the hallmarks of American conductor Janna Hymes. Renowned for her inspiring performances, musical depth and energetic presence both on and off the podium, she has developed a reputation as an exciting, detailed communicator. Praised by the press as “an architect, a builder in sound, a conductor with an overall view who never misses details”, Ms. Hymes is Music Director of Indiana’s Carmel Symphony Orchestra (CSO) since 2017.  A popular guest conductor, Hymes continues to expand her relationships with orchestras nationwide.

Upcoming guesting engagements include The Sewanee Summer Music Festival and the Savannah Philharmonic.

In May 2019 Ms. Hymes stepped down from her post as Music Director of the Williamsburg Symphony Orchestra. During her tenure, she led the orchestra on its first international tour at the Bermuda Festival of the Performing Arts and introduced several performance and education initiatives that are now part of the orchestra's season.  Recent performance highlights include guest engagements with the Venice Symphony (FL), and Roanoke Symphony Orchestra (VA).

Among the orchestras that Ms. Hymes has guested with are the Houston, Indianapolis, Oregon, North Carolina, Portland Symphony Orchestra (ME), New Hampshire, Hartford (CT), Madison (WI), Florida West Coast, Stamford, Harrisburg (PA), Spokane (WA), Richmond (VA), Springfield (MA), Chappaqua Chamber (NY), Bangor (ME) and Omaha symphony orchestras, as well as the San Francisco Women’s Philharmonic, Cincinnati Chamber Orchestra and the Florida Orchestra. Internationally, she has led the Costa Rica National Symphony (where she has been a frequent guest) the Delta Ensemble of Holland (where she has toured Amsterdam, Rotterdam and The Hague), the National Orchestre de Lyon, Besancon Chamber Orchestra and the Orquesta Sinfonica del Estado de Mexico.

In addition to her professional conducting career, Ms. Hymes is a frequent guest speaker. She has has served on the music faculty of the Worcester Polytechnic Institute (MA), University of Akron (OH), Butler University (IN), and as Artist in Residence at Colby College (ME).
​
Born in New York City, Janna Hymes is a Fulbright scholar, recipient of a 1999 Geraldine C. and Emory M. Ford Foundation Grant, and a prizewinner of the 1998 International Conducting Competition in Besancon, France. She studied under such prominent conductors as Leonard  Bernstein, Gustav Meier, Otto Werner-Mueller and Gunther Schuller, and holds degrees from the University of Wisconsin-Madison and the College-Conservatory of Music of the University of Cincinnati. She also studied at the Tanglewood Music Center, Aspen Music Festival, the Festival at Sandpoint (ID), and the Conductor’s Guild Institute.