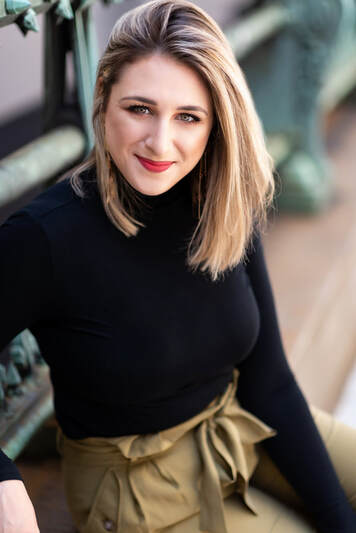 Soprano Alexandra Razskazoff is acclaimed by the New York Times as a “richly faceted, slinky soprano,” whose voice is “...ample in size with an intriguing instrumental color,” (Opera News). In the 2021-22 season, Alexandra will make her debut as Suzel in Teatro Grattacielo's production of Mascagni's L'Amico Fritz. She will also appear in concert with Maryland Opera and Mid-Atlantic Symphony.

In Washington Opera Society’s 2019 fall season, she performed the role of Lisa in Lehár’s Das Land des Lächelns. She also appeared with Maryland Lyric Opera at their 2019 gala, singing scenes from Faust, Fidelio and Der Rosenkavalier with orchestra.

She participated in the Merola Opera Program in 2017, where she performed as the leading ladies in scenes from Lucrezia Borgia and I Pagliacci. She was an Apprentice with the Santa Fe Opera in 2015, and accepted their invitation to return in 2016 to cover Donna Elvira (Don Giovanni). Alexandra spent summer 2013 at Music Academy of the West, where she performed Erste Dame (Die Zauberflöte).

​Academic credits include a reprise of Erste Dame (Die Zauberflöte) and Contessa (Le nozze di Figaro) while at The Juilliard School, where she earned her M.M. in vocal performance from 2014-16 under Robert C. White Jr. At the Peabody Conservatory, where she received her B.M. in vocal performance from 2010-14 under Dr. Stanley Cornett, she sang Blanche de la Force (Dialogues des Carmélites), Donna Elvira (Don Giovanni), and Abigail Williams (The Crucible). Alexandra is a grateful recipient of the Novick Career Grant generously provided by The Juilliard School.
LAUREN DECKER, MEZZO-SOPRANO

Rising star, Lauren Decker, possesses a booming contralto with “amber low notes” that is in a league of its own, lauded for “pouring out a dark, chocolatey sound with a plushness of tone and amplitude of voice rarely heard in a young singer”.

The 2021-2022 season marks notable debuts for Ms. Decker with the Royal Philharmonic Orchestra as the mezzo soloist in Beethoven’s 9th Symphony, Opera Philadelphia as Giovanna in Rigoletto, the Santa Fe Opera’s young artist program, covering the role of Dame Quickly in Falstaff, and the Aspen Music Festival as a Renée Fleming Artist in the season opening performance of Beethoven’s 9th Symphony, under the baton of Maestro Robert Spano, Third Lady in Die Zauberflöte, and Eduige in Rodelinda.

An alumna of the Ryan Opera Center at the Lyric Opera of Chicago, Ms. Decker covered the role of Erda in both Das Rheingold and Siegfried, covered 1st Norn in Götterdämmerung, and performed Schwertleite in Die Walküre, as a part of David Pountney’s “brilliantly imaginative”, new Ring Cycle. She made her Lyric Opera of Chicago debut as Third Lady in Die Zauberflöte and went on to perform as Jade Boucher in Dead Man Walking, First Maid in Elektra, Inez in Il trovatore, Enrichetta di Francia in I puritani, and Annina in La traviata. She covered the roles of Madame de la Haltière in Massenet's Cendrillon, Hécuba/Anna in Les Troyens, and Marthe Schwertlein in Faust. She was also seen as Miss Todd in The Old Maid and the Thief at the Grant Park Music Festival.

Ms. Decker made a triumphant debut with the San Francisco Symphony in Elgar’s Sea Pictures, a signature work for her. She has also performed in concert with the South Dakota Symphony in Mahler 8, the Elmhurst Symphony Orchestra in the Verdi Requiem, the Civic Orchestra of Chicago, and the Harare International Festival of the Arts in Zimbabwe.

Winner of the 2019 Edith Newfield Scholarship from the Musician’s Club of Women of Chicago and 2018 Lola Fletcher scholarship in voice with the American Opera Society of Chicago, Ms. Decker has been featured in the Harris Theater’s “Beyond the Aria” series alongside Christine Goerke and Eric Owens and, later, Michael Fabiano and Zachary Nelson. In addition to her four year tenure at the Ryan Opera Center, she has participated in the Britten-Pears Young Artist Programme, Dolora Zajick’s Institute for Young Dramatic Voices, the American Wagner Project, and the Georg Solti Accademia di Bel Canto.
KATHERINE GOFORTH, TENOR

Vocalist Katherine Goforth shares her “noble, colorful and iridescent vocal sound” (Magazin Klassik) in strong and heartfelt performances. “Goforth, with [her] virile voice, does not hold back," (The New York Times) offering vivid character portraits sung with the utmost commitment and finesse. Winner of the 2019 Oregon District Metropolitan Opera National Council auditions and the 2019 National Association of Teachers of Singing Artist Awards regional competition, she is a distinctive vocalist, representing the best of next generation operatic talent.
Goforth, who is transgender, excels in a wide range of roles across the gender spectrum.

As a member of the International Opera Studio of Oper Köln for the 2018/19 season, she sang Il Conte di Bandiera in Salieri’s La Scuola dei Gelosi in the Kammeroper and Tamino and Monostatos in Die Zauberflöte für Kinder, 3. Jude in Salome and one of the Comedian Harmonists in Oper Köln's original liederabend about the a cappella ensemble of the same name on the main stage, and covered Rev. Horace Adams in Peter Grimes and Jaquino in Fidelio. Of these performances, The German Stage noted that she was “stunningly charming,” the General-Anzeiger wrote that her “tenor projects clearly… (and her) piano passages reveal lyric qualities as well,” and Opern Magazin stated that she “rose to the highest form.” Goforth has appeared as a soloist with the Oregon and Seattle Symphonies, Opera Theater Oregon, Portland Opera Guild, Portland Chamber Orchestra, in live radio broadcast on All Classical Portland, and in concert with Pink Martini. For almost a decade, she has given recitals and Liederabende with pianist Wenwen Du.

With Lark Opera, where she is also an artistic consultant, she played Tamino and both stage directed and played the role of Peter (the Father) in Hansel and Gretel. Goforth has performed roles in chamber operas by Elise Winkler and Drew Swatosh for Seattle Opera's Jane Lang Davis Creation Lab. Goforth sang in the World Premiere of Matthew Aucoin’s celebrated new opera Crossing, as part of a small ensemble cast directed by Tony Award-winner Diane Paulus, with performances at the Brooklyn Academy of Music and American Repertory Theatre.
Goforth is a teaching artist at the Aquilon Music Festival, where she also played Tamino, Don Basilio in Le Nozze di Figaro, and Le Musicien in the modern day premiere of La chûte de Phaëton, and also serves on the festival's Board of Directors. She formerly served on the Board of Directors of Opera Theater Oregon, where she was actively involved in producing new operatic work, including Justin Ralls' Two Yosemites and productions of Rachel Portman's The Little Prince and Michael Daughtery's This Land Sings.

Lauded for his “stentorian Verdi style” by the Chicago Tribune and as “warm-toned, vivacious and humane” by the San Francisco Chronicle, baritone Anthony Clark Evans is quickly gaining recognition as one of the most promising Verdi baritones of his generation. The 2020 – 2021 season sees Mr. Evans operatic European debut as Giorgio Germont in La Traviata with Opéra National de Bordeaux, conducted by music director Paul Daniel. Additional appearances include Leporello in a new production of Don Giovanni staged and conducted by all female artists with Seattle Opera, and a return to the Metropolitan Opera to cover the role of Ernesto in Il Pirata.

The 2019 – 2020 season saw Mr. Evans return to San Francisco Opera in his role debut as Lescaut in Manon Lescaut, conducted by music director Nicola Luisotti. Mr. Evans also reprised the role of Sharpless in Madama Butterfly at Lyric Opera of Chicago and was scheduled to sing the same role in his house debut with Opera Philadelphia, which was cancelled due to COVID-19. Concert work included his scheduled debut with the Saint Louis Symphony Orchestra singing Brander in Berlioz’s La damnation de Faust conducted by Stéphane Denève, which was cancelled due to COVID-19.

Operatic highlights include Mr. Evans’ debut with the Metropolitan Opera as the Huntsman in the new Mary Zimmerman production of Rusalka, which was broadcast to theatres around the world as part of the Met’s Live in HD program, his San Francisco Opera debut as Sharpless in the Jun Kaneko production of Madama Butterfly, Zurga in the Lee Blakeley production of Les Pêcheurs de perles with Santa Fe Opera, Leporello in Don Giovanni with Tulsa Opera, Tonio in Pagliacci with Opera San Jose, his San Diego Opera debut as Sharpless in Madama Butterfly, his debut in the title role in Rigoletto with Kentucky Opera, and his debuts with Opera Theatre of Saint Louis, Dalals Opera, and Querido Arte in Guatemala as Marcello in La bohème. Additional roles at Lyric Opera of Chicago include Riccardo in I Puritani, opposite Larry Brownlee, the Jailer in Tosca (covering the Sacristan), Yamadori (covering Sharpless) in Madama Butterfly, the Huntsman (covering the Gamekeeper) in Rusalka, creating the role of Simon Thibault in the world premiere of Bel Canto, and covers of Leporello in Don Giovanni, the Count in Le nozze di Figaro, the Count in Capriccio and Wolfram in Tannhäuser.

Concert work includes his Ravinia Festival debut singing in Bernstein’s Songfest with Ensemble dal Niente, William Walton’s Belshazzar’s Feast with the Royal Scottish National Orchestra conducted by Thomas Søndergård, Theatre Director in Les Mamelles de Tirésias with the Chicago Civic Orchestra, an appearance at the Richard Tucker Gala at Carnegie Hall, his debut with the Phoenix Symphony in Beethoven Symphony Number 9 conducted by Tito Muñoz and an appearance on the “Stars of Lyric Opera at Millennium Park” concert, conducted by Sir Andrew Davis.